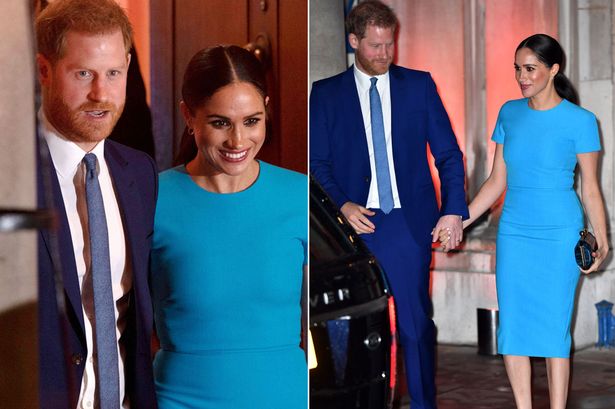 A group of rowdy royal fans chanted ‘Go on harry!’ as he left an awards show with his wife this evening.

The crowd was clamouring for the royal couple, shouting ‘Come on Harry’ as their Land Rover pulled up outside Mansion House, London, following the Endeavour Fund Awards.

As the Duke of Sussex walked around the car to face the men, they let out a cheer and screamed ‘Go on Harry’.

Harry, who has been made to give up his official patronages after deciding to move to Canada, is being allowed to retain his private links with organisations such as The Endeavour Fund, of which he is patron.

The charity supports service personnel keen to use challenges to help with their physical, psychological and social recovery and rehabilitation.

Speaking at the event, Harry said: “Some of you tonight have told me you have my back, well I’m also here to tell you I’ve always got yours.”

Amid the cheers when they arrived at the event, there was one loud boo from an onlooker.

However it did not spoil the mood, with Meghan telling the audience at the awards that it was ‘nice to be back’.

She told the audience: “It’s very nice to be back. It’s the third year I’ve had the incredible fortune of joining my husband here.