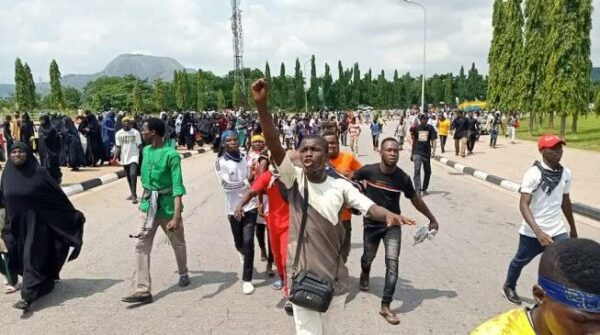 #EndSARS protest in the Federal Capital Territory (FCT), Abuja, on Wednesday was disrupted by pro-SARS protesters.

Checkout Magazine gathered that a clash erupted which resulted in the injuries and vandalism of vehicles at the busy Berger Roundabout.

Before the clash, the #EndSARS campaigners marched at the roundabout chanting: “End police Brutality now”.

At about 12:30 pm, the pro-SARS campaigners were seen marching towards the junction.

Twitter users claimed the “thugs were sent to attack harmless protesters, but got more than they bargained”.

A user of the microblogging platform, Wale Adetona, tweeted: “Pro-SARS thugs have been rented to hijack the peaceful protest at Berger Bridge, Abuja.”

The #EndSARS protests continue despite the Inspector General of Police Adamu to set up the Special Weapons and Tactical (SWAT) unit to replace the scrapped Special Anti-Robbery Squad (SARS).