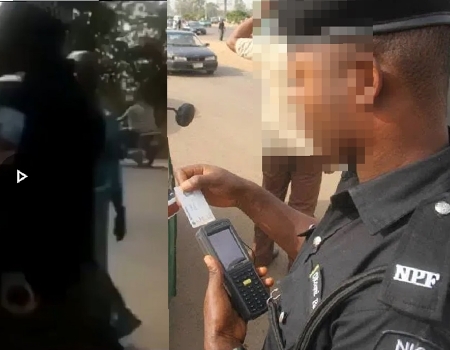 The Nigeria Police Force has reacted to the video showing a person wearing a police uniform and holding a point of sale machine to allegedly extort commuters.

The Police Force on Friday, through its verified Twitter handle said the video is being investigated.

Recall that a clip which was circulated on Twitter on Thursday, showed a man arguing with an officer that he would not make his ATM card available.

The officer was also shown holding a POS machine.

The police tweeted, “The @policeNG has commenced investigations to unravel the authenticity of the video, location of incident and identity of persons captured in the viral video where some persons in police uniform were captured, allegedly with POS machine and demanding ATM card from a member of the public.

“Members of the public with relevant information that could assist police investigators are enjoined to kindly DM @policeNG or furnish same via any of our confidential channels e.g

“The IGP condemns all acts of corruption by public servants, particularly police officers and is committed to bringing to book any officer found wanting in this regard.”

UK General election: Boris Johnson claims Brexit will no longer be talked about after...

I’m yet to get the right coaching offer – Oliseh