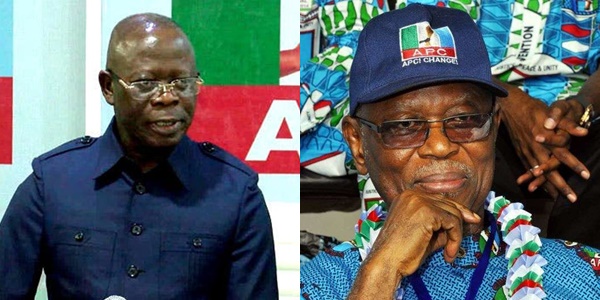 Two former national chairmen of the All Progressives Congress (APC), Chief John Odigie-Oyegun and Comrade Adams Oshiomhole on Saturday set aside their differences to call for unity in the Edo State branch of the party.

The meeting which was held in Benin, the Edo State capital featured major stakeholders of the party.

The APC leaders also hailed the Edo State Caretaker Committee of the party led by Col. David Imuse (rtd) for the success of the just-concluded membership registration across the 18 local government areas of the Southsouth state.

Odigie-Oyegun said: “Let us put the past behind and let us look at the future. I belong to APC, body and soul.

“Every member of the party, including the party’s leaders, have contributions to make for the improvement and success of the party. No individual can be greater than the party.”

Oshiomhole, in his remarks, called on APC members in Edo State to close ranks and work harmoniously with the leadership of the party in the state and other levels in the overall interest of the party.