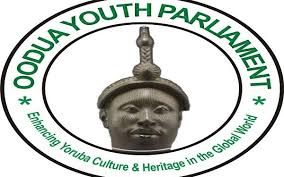 A Yoruba socio-cultural group, Oodua Youth Parliament, has advised hoodlums responsible for looting, destruction of lives and properties in the Southwest to desist from causing fire incidents in the name of #EndSARS protest, noting that such could chase investors away.

In a statement by its spokesman, Abdulmajeed Oyeniyi, the group said the protest, which started as a campaign against police brutality, has led to destruction and chaos in the region and some parts of the country.

He said: “We believe that some miscreants with hidden agendas are trying to crumble the investments and properties in the Southwest region in the name of protest. The saddest part is having the youth in south-western states brainwashed to partake in this colossal destruction.

“Our call is on the well and able Yoruba youths to retrace their steps, ‘Omo Yoruba E Ronu’. We urge you not to allow yourselves to be used in destroying the properties, which your fathers laboured to build.

“The destruction of lives and properties in the Southwest region is becoming too alarming and we are urging you not to join enemies of the country in setting the Southwest on fire and chase investors away.

“The Southwest has remained one of the unifying factors of the country and at the forefront when it comes to attracting investment. This happened all because the region has been peaceful.”

Oyeniyi, however, the Federal Government to reform the Police, adding that, “a single brush should not be used to paint the entire anti-robbery unit”.