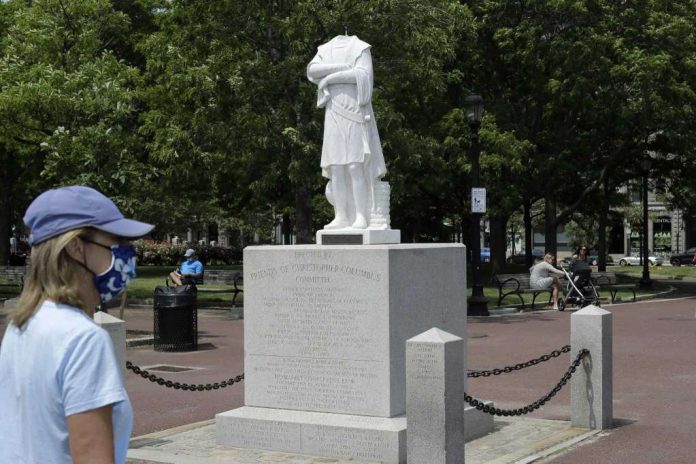 Anti-racist Protesters have pulled down a Christopher Columbus statue in Miami, as calls to remove sculptures commemorating colonizers and slavers intensify in the United States, according to local reports.

This follows an earlier pulling down of a Columbus statue in downtown Miami, and another was dragged into a lake earlier in the week in Richmond, Virginia, according to local reports.

The incidents come as pressure builds in the United States to rid the country of monuments associated with racism following massive demonstrations over the killing of George Floyd by a white police officer in Minneapolis last month.

Italian explorer Columbus, long hailed by school textbooks as the so-called discoverer of “The New World,” is considered by many to have spurred years of genocide against indigenous groups in the Americas.

He is regularly denounced in a similar way to Civil War generals of the pro-slavery South.

Boston police were alerted to the damage shortly after midnight on Tuesday, a spokesman told AFP. An investigation is under way but no one has been arrested, he added.

Dozens of American cities have over the years replaced “Columbus Day” in October — which became a federal holiday in 1937 — with a day of tribute to indigenous peoples.

But not Boston or New York, which have large Italian-origin communities.

Boston’s mayor Marty Walsh condemned the beheading but added that the statue would be removed on Wednesday pending a decision about its future, local media reported.

#EndPoliceBrutality: Police Join Protesters In Some Cities In Solidarity March