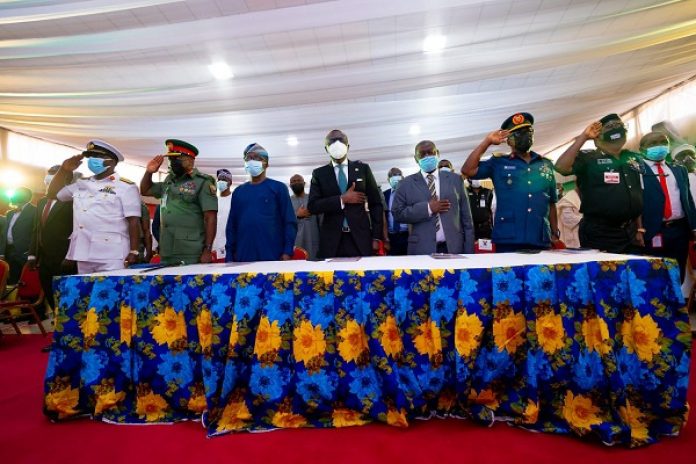 Lagos State government on Monday unveiled some of its plans to further regulate the activities of commercial motorcyclists as part of efforts to enhance security in the state.

Governor Babajide Sanwo-Olu, who condemned lack of adherence to law and order by Okada riders, said he would announce further changes to their operations in certain areas of the metropolis.

He said the string of lawlessness daily witnessed from the confrontation between commercial motorcyclists and law enforcement agencies required an urgent action, stressing that government would be announcing reforms in transportation, which will further make changes to the parameters of motorcycle and tricycle operators.

Governor Sanwo-Olu spoke at a stakeholders’ meeting on Security held at the Adeyemi Bero Hall, Alausa, Ikeja where the governor and leading lights in security circles listened to a group of panelists who highlighted the state’s security challenges.

His words, “We have noted with dismay the fact that Okada riders are disregarding and flouting the restrictions we imposed on their activities in certain areas of the metropolis. We have also observed with dismay, the ongoing violent confrontation by commercial motorcyclists against our law enforcement agencies.

“Based on all that we have seen and experienced in the past couple of weeks, as well as the increasing threat posed by the activities of commercial motorcycle operators to the safety and security of lives, we will be announcing further changes to the parameters of motorcycle and tricycle operations in the state in the coming days. No society can make progress amid such haughty display of lawlessness and criminality.”

Sanwo-Olu said the state government would be unveiling 500 units of First and Last Mile mini buses next week as safer alternative means of transportation in checkmating activities of Okada riders.