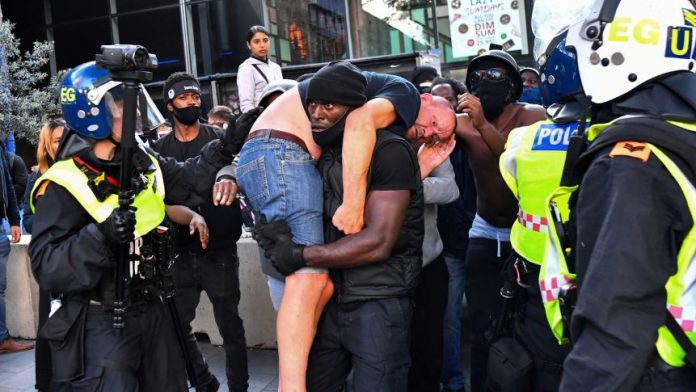 A Black Lives Matter supporter who assisted an injured counter-demonstrator to safety during violent clashes in London has said attributed his action to his concern for the man’s welfare despite being a member of the opposition.

Recall that Checkout Magazine reported how Mr Hutchinson had abandoned the Black Lives Matter protests, and draped the rival protester over his shoulder after he was allegedly attacked near Waterloo station.

Speaking to Sky News, Mr Hutchinson said he was “concerned” for the man’s life and “scooped” him up before carrying him to safety.

He said: “I really feel that if we hadn’t intervened when we did, I genuinely think he may have died.

“I didn’t do it for him per se. I didn’t want to see him perish or die but I really did it for the young men and women of BLM.

“I didn’t want their names tarnished with such an incident.”

Mr Hutchinson said he was not actually marching or demonstrating at the protests, but providing security to protect people.

A total of 113 people were arrested during a day of unrest in central London, which was condemned by Prime Minister Boris Johnson as “racist thuggery”.