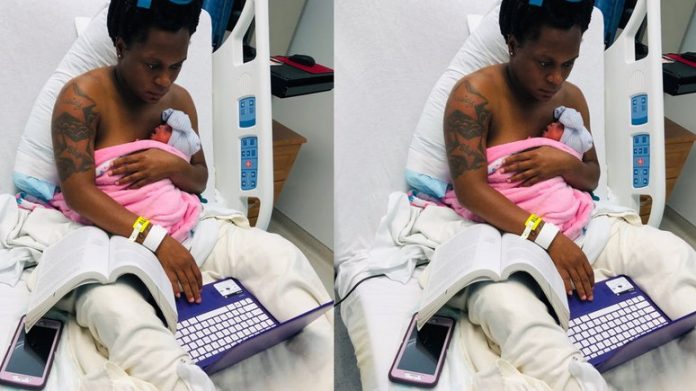 A young mother has been a subject of media attention after putting in an excellent performance in her exams not long after giving birth.

Kiara Nelson proved all doubters including her instructor wrong after her chance of doing well was written off.

Her story has inspired many people with some commending her can-do spirit which made her ignore all discouragements.

Kiara shared a photo of herself still on the hospital bed where she was delivered and revealed that she had two exams to sit for the same day just moments after giving birth.

She suffered preeclampsia, making her give birth at 35 weeks, which was way earlier than expected.

The pregnancy complications coupled with the fast-approaching exams made her instructor advise her to drop her class because she did not think Kiara could sit for her papers after delivery.

“I passed the midterm with flying colours after being told I was going get dropped from her class over.” she wrote on Facebook.

The determined mother of a beautiful baby girl said not even breastfeeding could deter her from taking part in the exams and now she has no regret for taking the risk.

She wrote in a post, “I could’ve used it as an excuse but what was that going to get me with that being said something I couldn’t control Prayers works every time Big thanks to the Lord (Don’t mind baby girl she’s sleeping well after a full belly).”