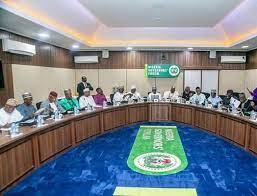 Tambuwal, who is also the Vice Chairman of the Nigerian Governors’ Forum (NGF), made the appeal yesterday in a media brief with State House Correspondents after a meeting with the Chief of Staff to the President, Prof. Ibrahim Gambari, in Aso Rock Presidential Villa, Abuja.

Tambuwal had led members of the Technical Committee on the implementation of the autonomy of State Legislature and the Judiciary to the meeting.

“We have just finished talking to the Speakers, and indeed the state judges, and the judiciary to continue to engage and the Minister of Labour is also engaging with the striking bodies to appeal to them, to appreciate the fact that we have made progress. They should call off the strike. We are appealing to them in the interest of this country; they should call off the strike,” he said.

Tambuwal said the technical committee raised on the matter had made reasonable progress on the implementation of financial autonomy to state judiciary and legislature, adding that the committee would meet again on Monday after receiving the final report of the committee.

“We are here with the chairman and leadership of the Speakers Conference, the Solicitor General of the Federation, and Senior Special Assistant (SSA) to Mr. President on Niger Delta, Sen. Ita Enang, who has been a member of the Technical Committee on the implementation of the autonomy of state legislature and the judiciary, together with the Chief of Staff to the President.

“We have just finished a meeting on how to put finishing touches and dotting the i’s and crossing the t’s on the final implementation of the financial autonomy for state legislature and judiciary.”