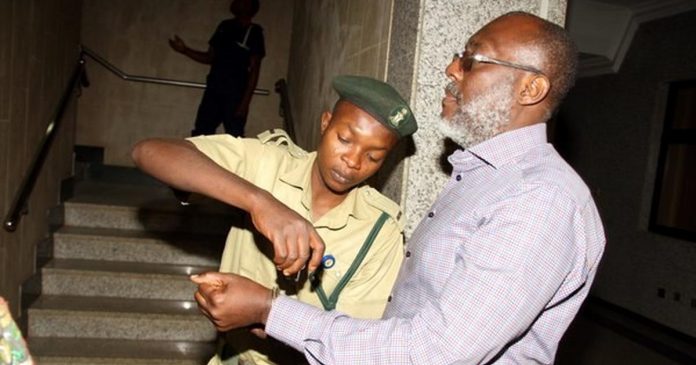 The Federal High Court in Abuja on Tuesday convicted and sentenced a former National Publicity Secretary of the Peoples Democratic Party, Olisa Metuh, to seven years’ imprisonment for money laundering arising from his activities preceding the 2015 presidential election which his party lost.

Justice Okon Abang, delivering judgment at the proceedings which lasted over six hours, convicted Metuh and his company, Destra Investments Limited, on all the seven counts preferred against them by the Economic and Financial Crimes Commission.

Counts 1, 2, 3, 4 and 7 had to do with the fraudulent receipt, concealment and unlawful use of the N400m paid to them by the Office of the National Security Adviser in November 2014 and which they used for political activities of the PDP and other personal purposes.

The judge also convicted Metuh and his firm for transacting with cash sum of $2m without going through a financial institution as alleged in counts 4 and 5.

He agreed that the prosecution, led by Mr Sylvanus Tahir, successfully proved that the transaction violated Section 1 of the Money Laundering (Prohibition) Act 2011 as amended in 2012, which pegs the maximum cash transaction an individual can undertake outside a financial institution at N5m.

The judge said, “The origin of the $2m remains undocumented which goes to the essence of the anti-money laundering law.”

He noted that “the sum of $2m and part of the N400m from the Office of the National Security Adviser was used to buy property on Banana Island, Lagos, from Daniel Ford International.”

Shortly before passing the sentences on Tuesday, the judge said the facts presented in the case showed that Nigeria needed a rebirth.

He sentenced Metuh to seven years imprisonment for counts 1, 2, 4 and 7; five years’ imprisonment in respect of count 3; and three years in respect of each of counts 5 and 6. He, however, directed that the sentences would run concurrently starting from Tuesday.

The order implied that the ex-PDP spokesperson would only spend in prison the highest number of years of jail terms imposed by the court, which is seven years.

Justice Abang ordered Metuh to refund N375m to the Federal Government, as the N25m which would have made it the complete N400m had already been voluntarily refunded by Abba Dabo.