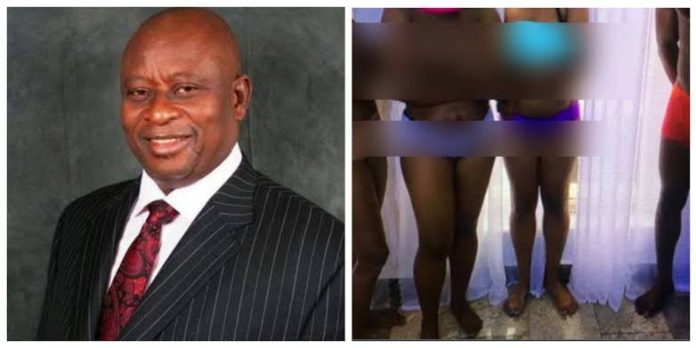 Former Minister of State for Petroleum, Olorogun Kenneth Gbagi, has denied being involved in the stripping of four workers at his hotel in Effurun, Uvwie council area of Delta state.

In a press conference held at his country home in Oginibo, Ughelli South council area of the state, Gbagi called on God to “punish” him if he truly he was involved.

He clarified that the said staff were not employees of the hotel, but “freelancers”, adding that there are records to show to the fact.

The ex-minister has been subject to criticism after allegation emerged in the news of him stripping four staff, comprising three women and a male, identified as Gloria Oguzie, Victor Ephraim, Roselyn Okiemute and Archibong Precious, in the past week.

Several rights groups and activists have taken to protest, calling for the arrest and prosecution of the hotelier.

He said at the press conference, “There was nothing as you have read, that happened. The people you saw in those pictures are not staff of my hotel. Legally, documentarily, they are not staff of the hotel. They are freelancers.

“Were you to do a forensic analysis of the video for my body on those pictures, and you find me there, I will resign from politics.

“I invited the Police from Ebrumede to take them. I will never descend to do such (strip people naked). It was politically motivated. I will not strip anybody’s daughter naked or strip any person.