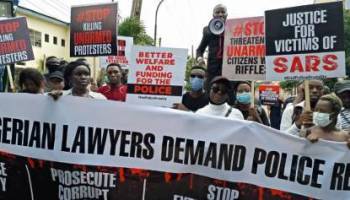 The Coordinator of Al-Mu’minaat Social Advocacy Project (SAP), Mrs Sherifah Yusuf-Ajibade says the #EndSARS protests has become a threat to social and economic activities, therefore it needs to be suspended.

The social entrepreneur in a statement on Monday, said the protest has gone from great to gruesome.

“It is no doubt that the police have not been friendly in any way to the people they are meant to protect. They have actually become the problem they were set up to quell. Our experience with SARS notwithstanding, the last two weeks have been an exemplary manner of forcing our sordid experience down the throat of our government. Thank God, the government has been responsive in record time by acceding to the demands of the people. However, Nigerians can no longer move freely and the #EndSARS protests have continued to threaten our collective social and economic activities. The protest is bringing hardship to us as a people and we cannot but call for it to come to an end. Beheading is not the remedy to a headache,” she said.

She further opined that sinister agenda has crept into the whole process and a good cause now has evil intentions.

She said: “Lesbian, Gay, Bisexual, Transgender (LGBTQ) is now a major part of the voice being championed and surreptitiously paying their way into the agenda.

“Let it be known that we are a people of values and upright culture. We value family, and so our society is not up for grabs. We reject LGBTQ+ agenda in its totality, for no good can come from a way of life inimical to human existence. It is unnatural, unconstitutional and so shall it remain. Keep your funding for we are not in need of it and its donors.”

Prince Charles gains £1m from those who die without wills