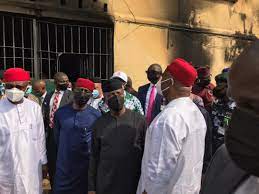 Imo State Governor Hope Uzodimma has advised operatives of the police to defend themselves amid recurrent attacks from criminals.

He said: “Each time there’s any problem in the state, the police pay dearly for it. During the #EndSARS protests, it was the police that paid for it.

“This time around, these hoodlums emerged and were able to visit this kind of mayhem on police facilities.

“I don’t know what the rules are. But, I think it’s also going to be a terrible thing for an armed man to kill an armed man. I think the purpose of being armed is to, at least, defend yourself.

“For me, it is unacceptable. There is no pretense because once police are insulted, the integrity of the government itself is insulted.

The governor assured the police of his administration’s resolve to “always do our best to complement your efforts in making sure security, which is the primary purpose of governance, is provided”.