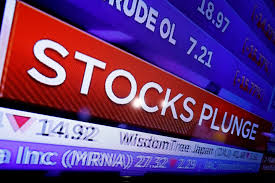 Global stock markets have sunk despite central banks around the world announcing a co-ordinated effort to ease the effects of the coronavirus.

London’s FTSE 100 index has fallen more than 6%, and other major European markets have seen similar falls.

On Sunday, the US Federal Reserve cut interest rates to almost zero and launched a $700bn stimulus programme. It was part of co-ordinated action announced alongside the eurozone, the UK, Japan, Canada, and Switzerland.

However, investors are worried that central banks now have few options left to combat the impact of the pandemic.

The new governor of the Bank of England, Andrew Bailey, has pledged to take fresh “prompt action again” when necessary to stop the damage to the economy from the coronavirus pandemic.

David Madden, a market analyst at CMC Markets, said that while central bankers were trying to calm the markets, “in reality it is having the opposite effect”. “The radical measures have sent out a very worrying message to dealers, and that is why they are blindly dumping stocks.”

All the main European share indexes saw big falls, with France’s Cac 40 index down more than 8% and Germany’s Dax dropping 7%. Earlier in Asia, Japan’s benchmark Nikkei 225 closed down 2.5% and the Shanghai Composite in China ended the day 3.3% lower.

COVID-19: Ministry of Environment to enforce compliance with COVID-19 protocols