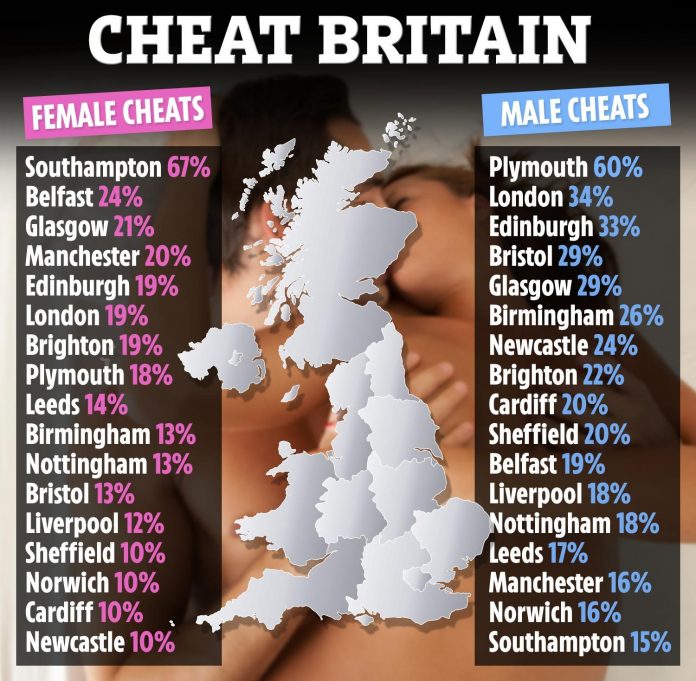 Women in Southampton – where the footie team are The Saints – are Britain’s biggest sinners, with two thirds of them cheating on their chaps.

A nationwide poll of 2,000 people found that 67 per cent of women in the Hampshire port city — a stag and hen hotspot with 250,000 locals — had been unfaithful to their current partners.

Curiously, Southampton’s men are the nation’s least likely to cheat, with just 15 per cent admitting to it. The worst place for male offenders — 60 per cent — is Plymouth.

Sex and relationship expert Rebecca Dakin said: “Many of the cities in the survey are those that rate the best for a night out. They attract large groups, all looking to drink, lose inhibitions and have fun.

“Some are top cities for stag and hen weekends, which may have something to do with the numbers being so high.

“Coastal cities could also be rife for cheating as there’s a new influx of people every season in holiday mode ­looking for good times, as you’re less likely to get caught out.”

In second place, on just 24 per cent, were the women of Belfast, then Glasgow on 21 per cent. The fewest female cheats were in Sheffield, Norwich, Cardiff and Newcastle, all on ten per cent.

As for men, after Plymouth on 60 per cent, the next worst place was London, on 34 per cent, the survey by website toppcasinobonus.com found.