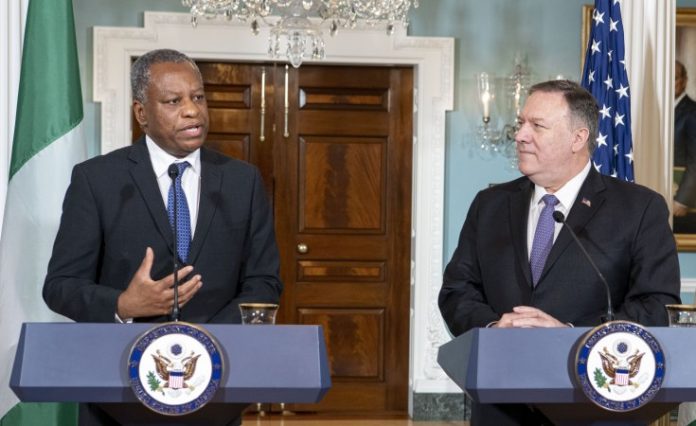 The United States government has given an additional 40-million-dollar (N14 billion) aid to Nigeria to expended in addressing humanitarian crisis in the aftermath of decades of terrorist activities.

The Grant was announced by the Secretary of State, Mr Mike Pompeo, in Washington DC on Tuesday, said this was in addition to nearly 350 million dollars (N122.5 billion) provided in assistance by the US last year.

Pompeo spoke during a joint media briefing with the Minister of Foreign Affairs, Mr Geoffrey Onyeama, after the US-Nigeria Binational Commission meeting hosted by the Department of State.

He said,“The foreign minister (Onyeama) and I also discussed today the massive humanitarian crisis that the conflict with Boko Haram and ISIS-West Africa and other religious and ethnic violence.

“To aid in this effort, I’m pleased to announce today an additional 40 million dollars in humanitarian assistance to Nigeria, adding to the nearly 350 million dollars that we provided last year.”

The BNC is a platform for the Nigerian and US governments to expand cooperation and advance shared goals in the areas of trade and investment, development, good governance and security.