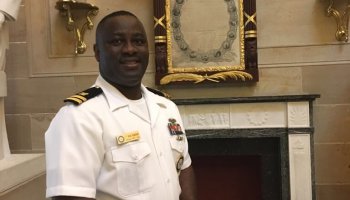 Lieutenant Victor Agunbiade has revealed lessons he learnt from his late father, after he was recently honoured by the United States Navy for being accountable for $45 million while effectively managing its largest overseas cash disbursement office.

The US naval officer recently recounted his Nigerian childhood in an interview with THE NATION, few weeks after his award in the United States.

Agunbiade who hails from a family of seven in Ijebu-Ode, Ogun State revealed that his father taught him how to choose the right path in life as well as the need to be confident.

His words, “While we did my homework together, my father would use the opportunity yet again to remind me to always keep these three things in my mind: aspiring to be the best in all my endeavours, remembering to learn something from everyone I passed through in life and respecting the people I met in life irrespective of status.

“He would say that some lessons are painful and some are painless, yet all are priceless because they would add to my experience. That advice stuck into my head, and I would use them as a benchmark to set targets for myself in everything I do and to always have it in my sub-consciousness not to undertake anything I do with a mere symbolic gesture.

For his exemplary exploits, he was awarded the Navy and Marin Corp Development Medal. Agunbiade, who was also named in 2018 as the Navy’s 2018 Officer Recruiter of the Year alongside 17 others and honoured at the annual Recruiter of the Year ceremony in Washington D.C. tells DAVID ADENUGA how unwavering determination and resilience have kept him going in the face of so many battles.

Agunbiade who described his decision to join the US navy as divine, revealed that his mission at Afghanistan was his toughest challenge.

“My toughest mission was Afghanistan. I followed through all I was taught in training – perseverance, dedication and strength! I look beyond myself and I made it through prayers and faith in God. I had good team and great leadership that provided awesome guidance and structures,” he said.