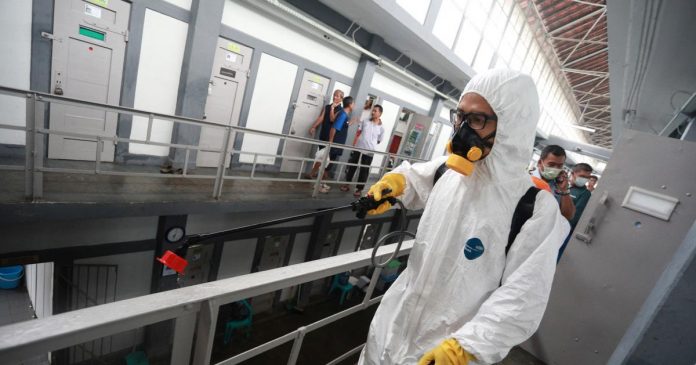 Reports reaching us at Checkout Magazine has it that Correctional Centers in the United States are becoming hotspot for COVID-19 spread in the country.

Coronavirus deaths are on the increase in jails and penitentiaries across the country, with officials having few options – they are unable to force adequate distancing in crowded cells and facing shortages of medical personnel and personal protective gear everywhere, PUNCH reports.

Fears continue to grow after the death of Andrea Circle Bear, a 30-year-old native American woman from South Dakota in one of the prisons
Pregnant when she was placed in a Texas federal prison in March on drug charges, she soon became sick with the disease and was placed on a ventilator, and gave birth by C-section.

She remained on the ventilator and died weeks later, PUNCH reports.

Covid Prison Data, a group of university criminal justice and data experts, says that based on public reports, 13,436 inmates and 5,312 corrections staff nationwide have tested positive for coronavirus.

But many states, and the federal penitentiary system, have done only a small amount of testing. Five of the 50 states don’t even report data.

Prisons occupied eight spaces on The New York Times’ compilation of the top 10 infected institutions, with the Marion Correctional Institution at the top.

The reasons are clear: prison populations are more dense and harder to separate than nursing homes and cruise ships, two institutions hit hardest by the disease.

Sex Law: ‘You can be jailed for 2 years for denying your husbands sex’...