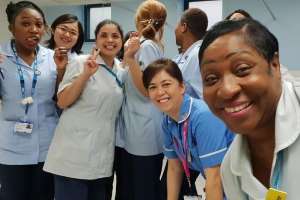 A Nigerian nurse resident in the United Kingdom has died after contracting the coronavirus in a London hospital where she worked alongside her sister — who is now fighting for life in intensive care.

Checkout Magazine learnt that the deceased Esther Akinsanya, 55, and her sister Mary Idowu, were rushed to the hospital within hours of each other two weeks ago.

Mother-of-two Esther Akinsanya, 55, died four days later on April 15. Her sister Mary Idowu, 61, is on a ventilator in intensive care. Ms Akinsanya, a “devoted and diligent” NHS nurse for more than 20 years, had finished her last shift two days before being admitted.

Mirror UK reports the sisters had been issued with personal protective equipment in line with government guidelines for those not working in intensive care units. However, there have been calls for the level of protection for staff on general wards to be raised. The Government has said the outbreak has so far killed 69 NHS workers and 15 care workers, but there are fears the total of health worker deaths is more than 100.

Mourning his mother, Mr Akinsanya, who has a younger sister and a three-year-old son, said: “They are tough women they didn’t mention the dangers they just got on with their jobs. They both tested positive and are convinced they got it at work. These heroes like my mum and aunt need to be protected. It’s just not good enough that people on the front line are dying like this.”

Mr Akinsanya said his mother had no known underlying health issue other than high blood pressure. His aunt has a heart condition and diabetes.

Chief executive of Lewisham and Greenwich NHS Trust Ben Travis has confirmed the death of a second nurse, mother-of-two Grace Kungwengwe who worked at Lewisham hospital. She died on April 19.

A tribute on a fundraisingpage for Ms Kungwengwe stated: “She leaves behind 2 sons and grandchildren. Grace was loved by many and her dedication and care for others was second to none.”