A British primary school laid off one of its teachers for allegedly “joking” to pupils about “sending them to the gas chamber” if they failed to finish their work.

The teacher at Newberries Primary School, Hertfordshire, allegedly made the antisemitic remark to a class of 28 pupils, including 11 who are Jewish.

According to the Mail Online, she said: “You better finish off your work quick, or I’ll ship you all off to the gas chambers.”

Afterwards, the teacher reportedly apologised, said she was joking and asked the students not to say anything.

However, the deed had been done has pupils reported the antisemitic comment to parents who then shared their outrage on school WhatsApp groups.

An emergency meeting was held by the board of governors on the same day the comments were made and the teacher, who was an agency worker, was dismissed immediately.

A spokesman for Newberries Primary School said: “We can confirm that last week we were made aware that an alleged racist comment had been made by an agency teacher working within the school.

“We acted on this immediately and our governors and leadership team are undertaking a full investigation. The agency teacher will not be returning.” 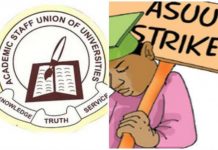