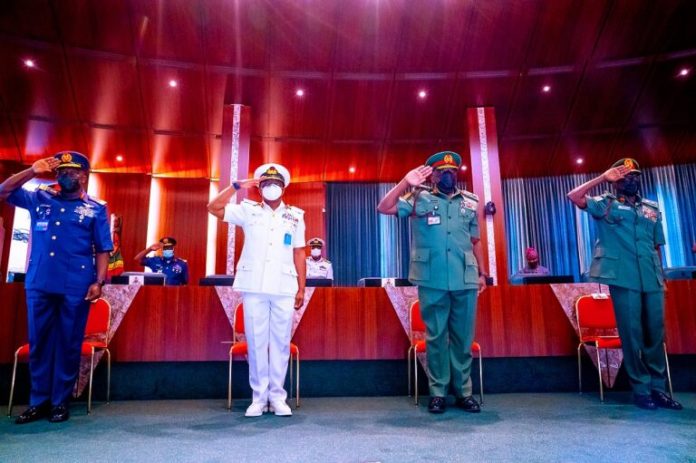 President Muhammadu Buhari on Friday charged the newly appointed service chiefs with the enormous task of defeating insecurity in the country as the military officers wore their new ranks for the first time.

Buhari asked them to secure the country as early as possible, preferably before the rainy season sets in.

To realize this objective, Buhari said they should seek out the best officers and men within the forces “irrespective of seniority and paper qualifications, and work with them to secure this country.”

Buhari, speaking at the decoration of the service chiefs with their new ranks yesterday, said since he has already accepted responsibility for their actions on the field, it is now up to them to “go out into the field and secure the country.”

He said: “You have got a few weeks to do that because by the rainy season, we expect people to develop confidence and go back to the land so that we don’t get into trouble by being away from the field and therefore unable to produce enough food for the nation.”

He also went on Twitter, saying: “As I assured at our last security meeting, I have taken responsibility as C-in-C for them to go out into the fields and every part of the country to ensure peace and security. I have accepted responsibility for all actions taken in fulfillment of the mandate to secure Nigeria.”

Buhari, assisted by Vice President and wives of the service chiefs, later decorated the military officers with their new ranks.

The Chief of Naval Staff Awwal Zubairu was elevated from Rear Admiral to Vice Admiral while the Chief of Air Staff, Isiaka Oladayo Amao, moved from Air Vice-Marshal to Air Marshal.