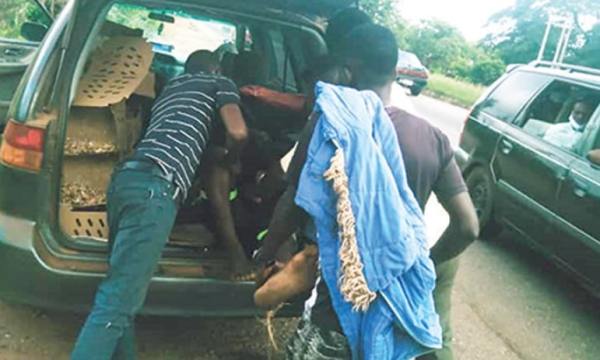 Information reaching us at Checkout Magazine has it that a certain Olajide Asade, 26, died after he was hit by a commercial vehicle on the Abeokuta-Siun-Sagamu Expressway.

PUNCH reports that the deceased was reportedly making a video call to his girlfriend while crossing the road when the accident occurred.

An eyewitness told PUNCH the tragic incident occurred after the vehicle the deceased boarded developed fault on the expressway, he added that while the other passengers were standing by the roadside waiting for the driver to repair the vehicle, the deceased reportedly concentrated on the video call.

The deceased’s brother, Azeez, said they were both travelling to their mother’s residence in the Ajah area of Lagos State.

Azeez confirmed that his brother had been making a video call to his girlfriend since they took off from Kuto in Abeokuta.

The driver, whose car (Honda Odyssey) hit the deceased, Bolaji Balogun, said Olajide was the one who bumped into his vehicle.

Confirming the crash, the Public Relations Officer of the Traffic Compliance and Enforcement Corps, Babatunde Akinbiyi, said the corpse has been deposited in the morgue of the General Hospital, Ijaiye, Abeokuta.

He added that the driver of the Honda Odyssey and the vehicle are now at the state Motor Traffic Division, Ibara, Abeokuta.”