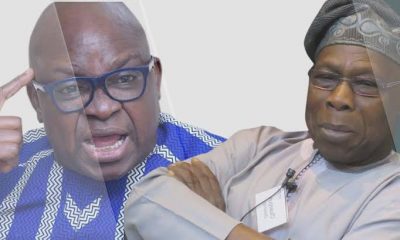 A PDP chieftain in Ekiti State, Opeyemi Falegan has warned the immediate past governor of the state, Mr. Ayodele Fayose to desist from making uncomplimentary remarks about ex-President Olusegun Obasanjo and other Yoruba leaders.

He made his statement on Monday in reaction to Fayose’s outburst against Obasanjo over his comment on Senator Buruji Kashamu‘s death, urged the ex-governor to desist from his uncultured behavior and persistent criticism of Yoruba leaders.

Falegan described Fayose’s criticisms as self-serving and provocative, saying his actions denigrate the aged-long custom and traditions of Yoruba land.

He said, “Since we all know that, nobody is a Saint, Chief Obasanjo like every other Nigerians is entitled to his opinion at all times especially as an individual, elder Statesman and a former Nigerian President. Therefore, for anybody, to act callously irresponsible; and insulting Baba Obasanjo would be a great mistake and unacceptable.

“Yorubaland is a cradle of custom, tradition, honor, respect, loyalty and homage to the elders. Therefore, politics or whatever reasons must not be condoned to change the peoples’ orientation for the present generation and unborn ones.

Falegan added, “As a former Governor, Fayose should always behave and talk like a good leader in Ekiti whom the younger ones can always see and look up to as a role model. By constantly insulting and ridiculing his elders, what morality, integrity, good ethics and good behavior is he teaching those following him? And these were the trademarks of the good people of Ekiti in those good old days.