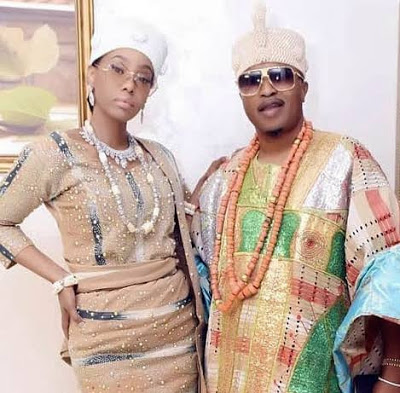 Olori of Iwo, Chanel Chin, the enstranged wife of Oluwo of Iwo, Oba Abdulrasheed Akanbi, has said her marriage to the monarch was built on a foundation of falsehood.

She revealed details of her ordeal while in the palace with the monarch in an interview with PUNCH.

She said, “When we met, I asked him to tell me the number of children he had, but he didn’t (tell) me the truth. He did not say 10 or even five. Our relationship was built on the foundation of lies. It was not until my son was six months old that I saw a blog post from one of his past wives, showing the names of all his children, wives and the ages of the children.

“When I brought it to him and challenged him, he said if he had told me at the time, I would not have agreed. But this is my life; he was playing with my life.”

She added that her husband based his infidelity claims on a WhatsApp message he saw on her phone from a male friend appreciating her beauty, she challenged the monarch to give details of her alleged infidelity.

She told PUNCH, “I was never caught with another man. We had 10 civil defence officers and policemen following us; and they were armed. They lived in the palace and followed us everywhere.

” So, it was absolutely impossible for Oluwo to catch me red-handed with a man. If I wanted to go to the bathroom, there was a policeman following me. I challenge him to give details of any such encounter. I have never defiled my bed or my body. I was never an unfaithful wife.

Rather, I have forgiven many unfaithful acts committed against our bed, our marriage and our family.

Fashola: I didn’t say Nigeria’s infrastructure is better than the US