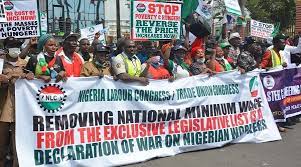 The Nigeria Labour Congress has pronounced nine governors as “anti-workers” for failing to abide by the Wage Act signed by President Muhammadu Buhari in 2019.

The NLC President, Ayuba Wabba, said he wondered why some governors, who were represented during the process of negotiations refused to pay the agreed N30, 000 minimum wage.

Wabba spoke at the Unity Fountain, Abuja while addressing workers before they took the protest to the National Assembly complex.

Wabba said: “When the N30, 000 minimum wage was fixed, it was negotiated. Six governors represented the interests of the geo-political zones. We had MAN, SMSE, CCI, NECA, also on the table.

“Our demand was N66,000 – looking at the economic challenge and how the purchasing powers of Nigerian workers have dwindled, but through the process of dialogue and negotiations, including the ability to pay, on the negotiation table, we were reasonable and everybody agreed on N30, 000.

“That is how the report was submitted to Mr President. A bill went to the National Assembly, there was a public hearing and it was promulgated.

“We are then taken aback that some governors; let me mention that the governors are nine – because some of them gave us this information; they are only nine out of the 36 that are anti-workers..”

Why FG has valid claim to Ibori-linked £4.2m loot – SAN