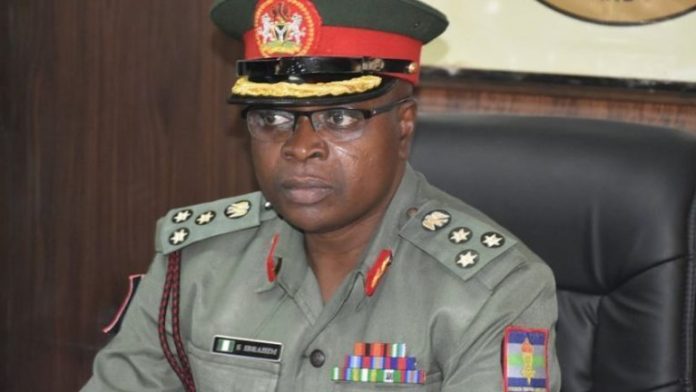 The Director-General, National Youth Service Corps (NYSC), Brig.-Gen. Shuaibu Ibrahim has said the best option to tackle corruption from the root is to use younger Nigerians who are the future leaders of our country.

He said this led to the need to include corps members in the crusade against corruption since they are future leaders of the country.

He made the assertion on Friday, during an interview, after 1,000 youth corps members staged a road walk against corruption, from the office of the Economic Financial Crime Commission (EFCC) situated at Haji camp in Kano.

He said corruption is a cankerworm that must be fought with a concerted effort by all Nigerians. He, however, disclosed that the walk took place across all the 36 States including the Federal Capital Territory (FCT), where 1,000 corps members were expected to participate in each state.

According to him, the road walk was to sensitise the public on the dangers of corruption in the society and its implications, calling on Nigerians to work hard to earn legitimate living devoid of corruption.

The NYSC boss, who led the roadshow in Kano, said the event was targeted at the youth because they were the leaders of tomorrow. He advised the corps members not to be in a hurry to be rich overnight.

The NYSC DG added that the Chairman of EFCC, deemed it fit to incorporate our corps members to further sensitise Nigerians on the scourge of corruption in the country.

While speaking on the occasion, Head of Kano Zonal Office of the EFCC, Mr Akinyene Ezima, who read a speech on behalf of the acting chairman of the EFCC, Mr Ibrahim Magu, said corruption is an accidental malaise and must not be allowed to remain in our midst.

He then stated that the objectives of the walk include the sensitisation and mobilisation of youths across the country to reject the evils of corrupt practices.