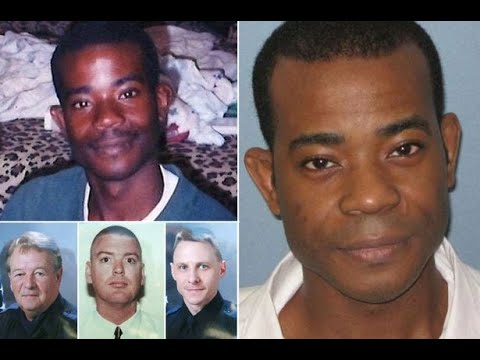 A death row inmate convicted of masterminding the murders of three police officers nearly 16 years ago has been executed by lethal injection.

Nathaniel Woods was convicted for his part in what became known as the ‘deadliest day’ in the history of Alabama’s Birmingham Police Department in 2004.

Campaigners pleaded with the US Supreme Court to call off the execution at William C. Holman Correctional Facility in Atmore last night, with some tweeting President Donald Trump to step in.

However, their calls met deaf ears and the 44-year-old was executed for the murders of officers Carlos Owen, Harley A. Chisholm III and Charles R Bennett despite never pulling the trigger.

Prosecutors said Woods had lured the three law enforcers into a home in Birmingham where they were killed – but supporters claim the evidence against him was flimsy.

During his trial – in a practice abandoned by every other US state except Alabama – the jury could not even come to a unanimous decision on his sentencing, with two opposed to the death penalty.

Activists, civil rights groups and Wood’s own family succeeded temporarily in delaying the execution – initially scheduled for 6pm local time on Thursday – but their appeal was ultimately quashed.

Campaigners had rallied for the courts and Governor Kay Ivey to step in as the days ticked down before the Supreme Court issued a stay just minutes before the execution was set to take place. But three hours later at 9.01pm Woods was pronounced dead, with the court having thrown out any hope of changing the sentence.

The murders took place on June 17, 2004, at an apartment in Ensley, Birmingham, with the three officers attempting to serve a warrant for Woods’ arrest on suspicion of a misdemeanor assault.

Kerry Spencer confessed to being the lone shooter but Woods, who was also in the property at the time, was charged as an accomplice with prosecutors claiming they both lured the men to their deaths.