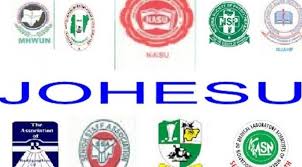 The Joint Health Sector Unions (JOHESU) has suspended the seven-day warning strike embarked upon last week, and it has members are expected back at work today.

The leadership directed its members to resume work nationwide.

JOHESU called off the strike action although the Federal Government’s through its Health Ministry is yet to address the health workers’ demands as presented within the seven-day warning strike as was done to other bodies in the health sector.

In a statement, the union said its next line of action would be decided by the Expanded National Executive Council of JOHESU in due course.

The statement reads: “This is to bring to your notice that the seven-day nationwide warning strike embarked upon by the members of the Joint Health Sector Unions would come to an end midnight today, 20 September, 2020.

“By this notice, all health workers under the five unions that make up Joint Health Sector Unions and Assembly of Healthcare Professionals Association (AHPA) shall return to work on Monday, 21st September, 2020 across all Federal Health Institutions in the country.

”However, since the Federal Government through the Federal Ministry of Health has continued to exhibit high level of bias/discrimination by refusing to address the demands of our members as presented by JOHESU within the seven-days of the warning strike as was done to other bodies in the health sector, the next line of action would be decided in due course by the Expanded National Executive Council of JOHESU.

Kidnap victim says Herdsmens adbucted him, others to fund cost of bullet for operations