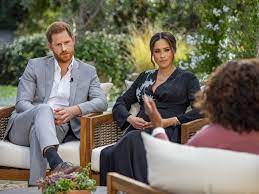 American actress and wife to Prince Harry, Meghan Markle on Sunday revealed details of her tumultuous relationship with the royal family during an explosive television interview.

She revealed that she contemplated suicide after joining the royal family, while also raising allegations of racism in the monarchy.
‌
Explaining the couple’s dramatic exit from royal life, Meghan said she was denied help during her mental health crisis, was targeted by lies, and that there was official concern about the skin color of her unborn son.

Meghan, whose father is white and mother is Black, spoke out in an interview with Oprah Winfrey that immediately became one of the most extraordinary chapters in recent royal history and was set to rock the British institution.

“I… just didn’t want to be alive anymore. And that was a very clear and real and frightening constant thought,” she told Winfrey, describing the impact of a torrent of vitriol from hostile tabloids and social media.

Asked if she had had suicidal thoughts while pregnant, Meghan replied “Yes. This was very, very clear.”

Meghan, 39, also told of royal “concerns” about “how dark” her son’s skin would be, saying Harry revealed to her official conversations over Archie’s appearance, as well as the security he would be entitled to, ahead of his birth on May 6, 2019.

“In those months when I was pregnant… we have in tandem the conversation of ‘he won’t be given security, he’s not going to be given a title’ and also concerns and conversations about how dark his skin might be when he’s born,” Meghan said.

“That was relayed to me from Harry, those were conversations the family had with him,” she said.

Almajiris: Give birth to children you can cater for, Sanusi tells Nigerians