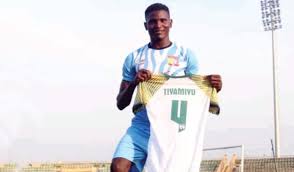 Sanni Abubakar, a principal witness in the death of a Remo Stars Football Club player, Tiamiyu Kazeem, has narrated how operatives of the Special Anti-Robbery Squad allegedly caused his death.

He countered the claim by the police that the late defender jumped out of the vehicle while attempting to escape.

Kazeem, aka Kaka, was crushed by a hit-and-run driver on the Sagamu-Abeokuta Expressway while being taken to the SARS office on Saturday.

While the police claimed he jumped out of the vehicle and was crushed by an oncoming vehicle, the friend said he was pushed out.

Abubakar told PUNCH Metro that the policemen arrested him and the deceased in Sagamu where they had parked their vehicle to buy engine oil.

He noted that the operatives, who were in a Sienna vehicle, seized their phones. He explained that one of the officers drove Kazeem’s car and trailed the police operational vehicle, where his friend was held.

He noted that after the vehicles passed the area command’s office at Sagamu, he queried the cop, who insisted that they were going to the SARS headquarters.

The victim’s friend said after passing the Sagamu Interchange, the policemen parked at a junction and continued to interrogate them.

He said the SARS officer with him (Abubakar) opened the boot of the deceased’s car and when he (Abubakar) attempted to get out of the vehicle, the cop threatened to shoot him dead.

However, the police said the deceased caused his own death by jumping out of the vehicle while being taken to a police station for interrogation.

The state Police Public Relations Officer, Abimbola Oyeyemi, in a statement said only one SARS operative from the Zonal Intervention Squad, Obada, Abeokuta, was involved in the incident.

According to Oyeyemi, the operative went to arrest the victim after a complaint over his alleged harassment of some residents with army uniform.

He explained that Kazeem was arrested and was being taken from Sagamu to the ZIS office at Obada when the police operational vehicle developed a fault on the road.

While the vehicle was being fixed, the suspect, according to the PPRO, jumped out of the vehicle and fled.

He said he was crushed to death by an oncoming vehicle.

Meanwhile, the state Governor, Dapo Abiodun, has promised to investigate the death.

Abiodun, who described the killing as unfortunate, urged all residents of the state to remain calm.

The governor, in a condolence statement signed by his Chief Press Secretary, Kunle Somorin, on Sunday, urged players, management and supporters of the club to be calm, adding that the killers would be brought to justice.

He described the late player as a young man with great potential for the development of the state and the nation.

Why Nigerian youths must focus on skills, not paper qualifications – Pantami