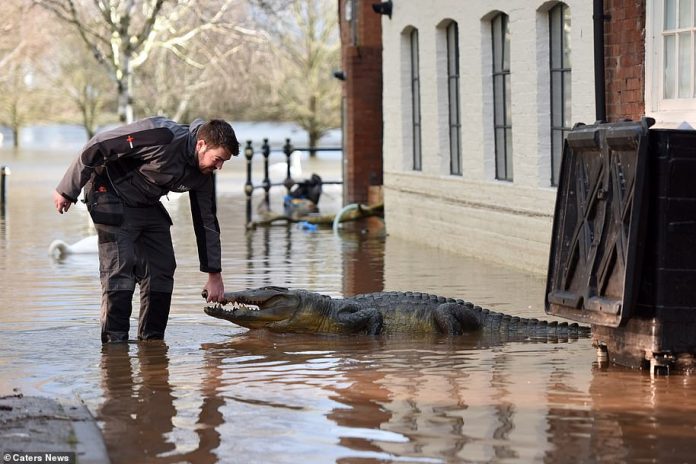 A British Hotel Managed was scared to his wit when he all of a sudden found a ‘crocodile’ floating in flood waters.

The realistic crocodile model floated down stream, giving a light-hearted moment for those working to clean the devastation left by Storm Dennis.

Richard Hill, manager of Browns at the Quay, 53, from Worcester, initially thought the crocodile had escaped from the local safari – providing a heart stopping moment of fear – but on closer inspection, saw that it was actually a fibre glass model, presumably garden decor.

Richard said: ‘All the staff had a bit of a moment, when we first spotted it at about eight this morning.

“We were taken aback to say the least, but once we realised, it turned into the highlight of the day.

“There’s a lot of mess and mud to shift through but it provided a light moment amongst all the mud, which was very much needed and deserved.

The number of flood warnings in force across England and Wales has increased as more heavy rain, gale-force winds and snow is forecast.

Why Consumers always run out of data – NCC