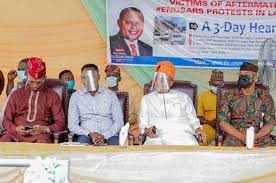 The financial report released by Feminist Coalition, a not-for-profit organisation and one of the leading supporters of the #EndSARS campaign on Saturday has been a subject of debate online.

The coalition is one of the major groups that provided financial support for Nigerian youths during last year’s protests against brutality and extrajudicial killings of citizens by the now-disbanded Special Anti-Robbery Squad (SARS).

During the protest in October 2020, donations were made to the coalition by their supporters through bitcoin after government authorities reportedly blocked its account.

After the protest, the coalition stopped receiving donations, and promised to provide a breakdown of how the remaining funds would be disbursed.

The coalition, which received over N150m donation for #EndSARS elicited public outcry for releasing its financial report to ‘donors’ only, while critics demand that the group makes the report public.

The coalition tweeted on Saturday, “Donors to the October 2020 peaceful #EndSARS protests have been emailed a copy of the completed audit. Thank you again to all who donated.”

The complete audit was carried out by SIAO, for a period of six months which ended on 31 March 2021.

Many believe the audit should be a public document, especially after allegations of Bitcoin donations the group received were mismanaged.