It was a dark Tuesday in Asaba as seven people including a four year-old boy lost their lives in an auto crosh which occured on the Asaba-Benin Expressway around Issele Azagba/Akwukwu Igbo.

PUNCH reported that four others, who survived the accident, have been admitted to the Federal Medical Centre, Asaba.

According to reports, the tragedy occured when the driver of a truck laden with crates of beer crashed into an 18-passenger bus.

We gathered that an explosion caused by the crash led to the demise of the four-year-old boy, the truck driver and his motor boy as well as five others, as they were badly burnt.

An eyewitness, identified simply as Miracle told PUNCH that the truck driver, Mohammad Kurah, was on top speed and veered off his lane to collide with another vehicle before crashing into the passenger bus from the rear.

According to him, the bus somersaulted several times before it caught fire, which consumed some of the passengers.

The Sector Commander, Federal Road Safety Corps, Delta State, Mr Ocheja Ameh, who confirmed the accident, described it as pathetic, adding that it occurred a few metres from the Issele Azagba military checkpoint.

He, however, said the crash claimed only two lives. 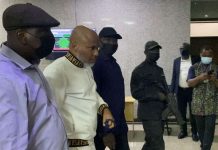