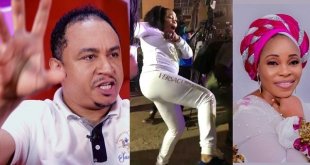 He took to his Instagram page on Thursday, February 20, 2020, where he shared his views on her now-viral dance video. According to him, even he doesn’t see anything wrong with her dancing, she looked like a pair of worms mating.

“I don’t see this as worldly, there is nothing wrong with her dancing. However, in my honest opinion, the dance step is rather repulsive and it makes her look contorted and uncouth. African dance steps are graceful and elegant, this isn’t. To me she looks like a pair of worms mating,” he wrote.

He has however taken down the post. Daddy Freeze’s comments are coming hours after the video of Tope Alabi dancing went viral. The video was shared on Facebook by a user, Adeniji Aderogba who dragged the gospel singer for her ‘worldly’ dance moves.

The music star while granting an interview with Nigeria, a show on TVC defended herself when asked about the now-viral video. According to her, it was at her father’s burial and she needed to worship God in her way.

Since the video of Tope Alabi dance to what has now been described as a ‘worldly’ dance move, there have been diverse opinions from different quarters.

As usual, some have dragged her not portraying the righteous Christian she claims to be. While for others, there is not out of the ordinary in the video.

LASG asks returnees from China to submit to Quarantine