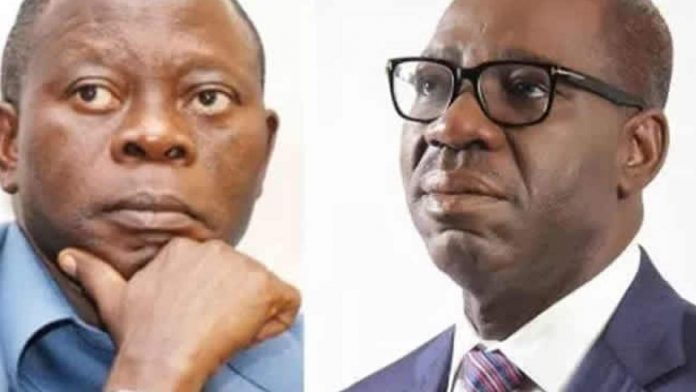 The crisis rocking the Edo State chapter of the All Progressives Congress (APC) continued on Saturday as some members of the party protested against the national chairman of the party, Adams Oshiomhole.

Oshiomhole, who was in Benin to attend the burial ceremony of Madam Cecilia Agbonyinma, mother of former member of the House of Representatives, Mr Ehiozuwa Agbonyinma, had arrived at the Benin airport where some other chieftains had gone to receive him.

But Oshiomhole and his team were accosted by a large crowd, alleged to be members of the party. Not even the presence of armed security operatives at the airport could dissuade the crowd who booed and rained expletives on the national chairman over the face-off between him and the Edo State governor, Mr Godwin Obaseki and the crisis that is tearing the party apart in the state.

But the state government had denied any involvement in the airport incident.

In a statement, Special Adviser to the Governor on Media and Communication Strategy, Mr Crusoe Osagie, said the government “has no connection with the crowd that was reported to have booed Oshiomhole.”

Oshiomhole, who was received by former deputy governor, Dr Pius Odubu, former Secretary to State Government, Pastor Osagie Ize-Iyamu, General Charles Airhiavbere and other leaders of APC, brushed aside protests by some thugs who attempted to disrupt the airport ceremony where thousands of the ruling party supporters came to welcome him.

Heavily-armed security personnel had been mobilised to the airport following reports that some youths had massed at the airport.

Armed soldiers were stationed at the airport entry gate as well as two police vehicles while operatives of the Department of State Services (DSS), Nigeria Security and Civil Defence Corps (NSDC) manned the various points of the airport.

Some APC chieftains, who refused to disclose their names, however, accused some top government officials of being behind the airport incident, insisting that it was wrong for them to always mobilise thugs to harass the party’s national chairman. But Osagie insisted in the statement that Oshiomhole’s travails had nothing with the state government.

He stressed that the state government wwould continue to maintain law and order, adding that the government was committed to protecting the rights of all law-abiding citizens in the state.