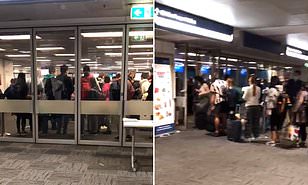 A shocking video, filmed by an outraged pilot, shows the passengers standing within touching distance of one another as they queued for immigration – despite government advice to keep 1.5 meters apart to slow the spread of coronavirus.

Although many international flights have been cancelled, planes arrived today from all over the world including Doha in Qatar, Shanghai in China and Tokyo in Japan.

The man who filmed the video told Daily Mail Australia he was ‘angry and disappointed’ after discovering what he estimated to be 300 to 400 people crammed shoulder-to-shoulder in the one room.

The pilot confronted an Australian Border Force officer about it. ‘I asked him, are you aware of the national guidelines for social distancing? He said “yeah”.