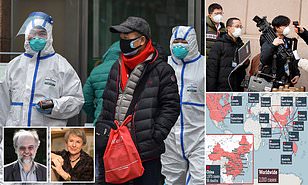 Chinese minister of health, Ma Xaowei has expressed fears on the possibility of the coronavirus spreading following its outbreak.

The minister made this known while he briefed face-masked reporters, therefore sparking concern around the world.

Xaowei mentioned that that the disease can be contagious even before symptoms show, noting that it can be passed from person-to-person during its 14-day incubation period.

He however assured that authorities have cranked up efforts to stop spread.

More than 2,000 people have now been infected worldwide and 56 have been killed in China.

The coronavirus which has infected 2,000 and killed 56 was today revealed by Beijing officials to be contagious even before symptoms show.

Ma said he has ‘maintained close communication with the World Health Organisation’ and invited inspectors to examine the country’s response.

He also revealed Beijing is sharing information with other nations after the United States, Thailand, South Korea, Japan, Australia, France and Canada all confirmed cases.

As governments in China, Britain and around the world double down efforts fend off the virus:

MTN to invest over 580 billion naira in Nigeria