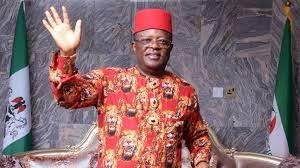 The All Progressives Congress has embarked on a mission to persuade more governors in the Southeast region to join the ruling party, according to reports.

This comes after Ebonyi State Governor, David Umahi allegedly informed the PDP National Working Committee last week in Abuja, of his decision to join the ruling party following a disagreement over the zoning of the party’s 2023 presidential ticket.

The PUNCH reports that the APC Caretaker/Extra-Ordinary National Convention Planning Committee led by the Yobe State Governor, Mai Mala Buni, had directed the party’s leaders in the South-East to reach out to more governors and National Assembly members in the region.

Checkout Magazine gathered that among those being targeted by the APC leaders were the Abia State Governor, Okezie Ikpeazu; his Enugu State counterpart, Ifeanyi Ugwuanyi; and Willy Obiano of Anambra State.

“For now, we are reaching out to the Anambra State Governor, Willie Obiano, and the Abia State Governor, Okezie Ikpeazu, as well as their Enugu State counterpart, Ifeanyi Ugwuanyi. Our leaders in the South-East, including Hope Uzodimma, Uzor Kalu and Rochas Okorocha, are also talking to people in the zone.

“Apart from the governors, we are also expecting members of the state and National Assemblies to also come on board.”

However, responding to this development, the PDP remains undisturbed by the ruling party’s move. It noted that it had not reached a time when zoning of the presidency and other political offices would be decided.

How Nigeria can gain from ‘witchcraft’ conference – Organisers