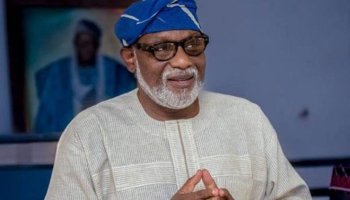 An aspirant of the Ondo State Governorship seat, Mr Isaac Kekemeke has said the incumbent governor, Rotimi Akeredolu does not deserve a second term in office, as he expressed his confidence to perform better if elected.

Mr Kekemeke who is the immediate past Chairman of the All Progressives Congress made his statement in an interview with PUNCH.

He said, “…since Governor Rotimi Akeredolu won the election and was inaugurated, we have never been one. I don’t like to criticise him but the bucks stop at his table. His inability to put all of us together after he won is the foundation of the crisis.

“So, for me, the party is more important than any individual’s aspiration because whatever aspirations you have, you still need the platform of the party. And I say look, let us come together but I do not think that Governor Akeredolu deserves second term, I can do it better.”

On why he deserves the ruling party’s ticket, Mr Kekemeke said his plans are concerned with building a government that tackles the personal challenges of individual citizens; in a bid to enable the citizens live happier and decent life.

President Buhari sacked me as CJN because of Atiku, Onnoghen reveals