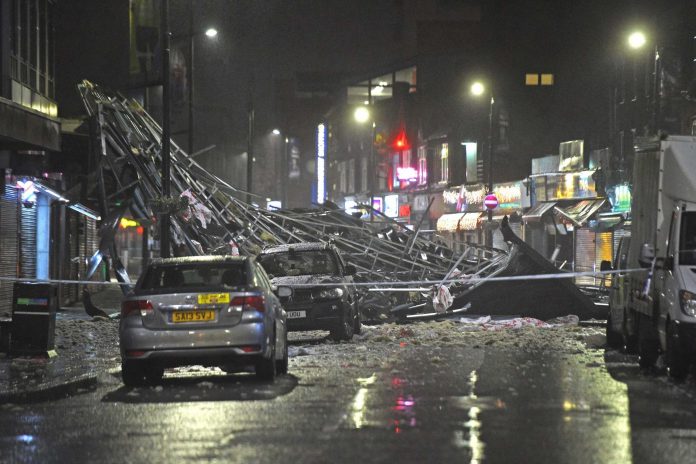 A 48-hour period of wild weather brought severe gales to much of the country on Tuesday, causing the roof of an apartment block to crash into Slough High Street in Berkshire.

It began with Storm Brendan hammering Ireland on Monday, causing thousands of homes to lose power, before bringing winds in excess of 80mph to parts of Scotland and England as flights were diverted and railways faced disruption.

And severe conditions, after easing temporarily, are set to return with another spell of wind and rain hitting the UK on Thursday, Met Office forecasters have warned.

A yellow warning of wind covering much of England is due to expire at 5am on Wednesday, while a rain warning covering south-east England is scheduled to cease at 9am.

Meteorologist Alex Burkill, from the Met Office, said: “It will take a little while but the rain should clear by lunchtime. Once it does clear away, otherwise tomorrow, most places are in for some decent sunny spells.”

There could be further thundery showers mainly to the north and west of the UK, with the chance of sleet and snow across the hills and mountains of Scotland and Northern Ireland, according to the forecaster.

Some 25 flood warnings and 165 flood alerts were issued by the Environment Agency on Tuesday, as coastal areas struggled with strong gusts, high tides and large waves. Rail passengers faced delays and temporary speed limits due to the heavy winds and fallen trees, while drivers were advised to take extra care on the roads.

Although the wind is due to ease off on Wednesday, conditions will still be blustery, Mr Burkill said, and temperatures are due to dip slightly to 9 degrees. But he warned that more unsettled weather was ahead on Thursday, particularly during the second half of the day, when places across the country could expect wet and windy weather.

A gust of 78mph was recorded on the Isle of Wight on Tuesday, while the village of Libanus in Brecon Beacons National Park, Wales, saw 42mm of rainfall in 24 hours, according to the Met Office.

Judge orders change in sentence for man imprisoned for 36 years in prison for...