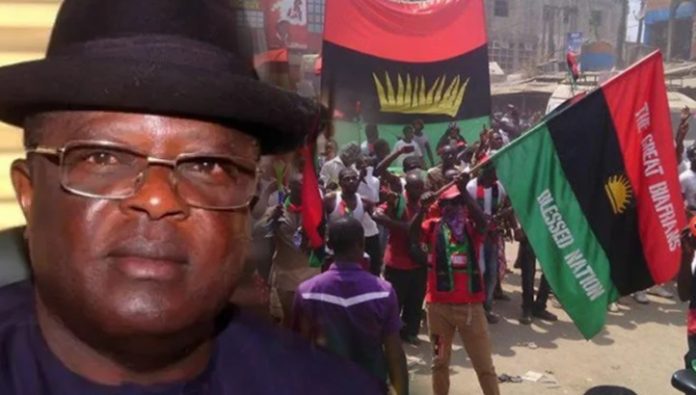 The Governor of Ebonyi State, David Umahi has advised those pushing for the Biafra Republic to sheath their swords.

Umahi spoke at the Pa Ngele Oruta Township Stadium, venue of the inauguration of the State Command of the Southeast Security outfit codenamed: “Ebubeagu”in Abakaliki. He said the outfit was not created to fight any group in the state.

He renewed his call on pro-secessionist groups in the Southeast to cease fire and get empowered by the government.

Umahi, who is also the Southeast Governors’ Forum Chairman, said: “We the governors of the Southeast zone have extended an olive branch to our youths who have been brainwashed, who are in the bushes, that we are committed to reintegrating them and making them useful members of the society.

“Ebubeagu is not there to fight any legal or illegal group but to assist the Police to root out criminals. So, that is the outfit’s mandate.

“Today, history is being made, seeing these gallant men and women that are members of the Southeast Ebubeagu Security.

“Let me say that before now, we have always had the Neighborhood Watch and when we said there was a need for uniformity, we brainstormed and we came up with the Southeast regional Ebubeagu Security Outfit.

“I can say that over seventy per cent of the governors in the Southeast have signed Ebubeagu into Law, Ebonyi was the second; Imo was the first.

“Let me commend the handlers, what I saw today is encouraging. The parade was excellent. I am being encouraged to challenge the HAG to extend this outfit to provide employment to our people and make it pensionable.

“So, it is my view that in 2022, we will make this outfit employable. The function of Ebubeagu is to assist the police in carrying out activities that would guarantee law and order in the society. So, let me say that this is not alternate police; there should be no altercations; we will not fight the police; we will not disobey the police.

“Let me say that the outfit is not politically motivated, those who have been sponsoring insecurity in the State who are against the Ebubeagu should go to Court as this outfit would never be disbanded.”