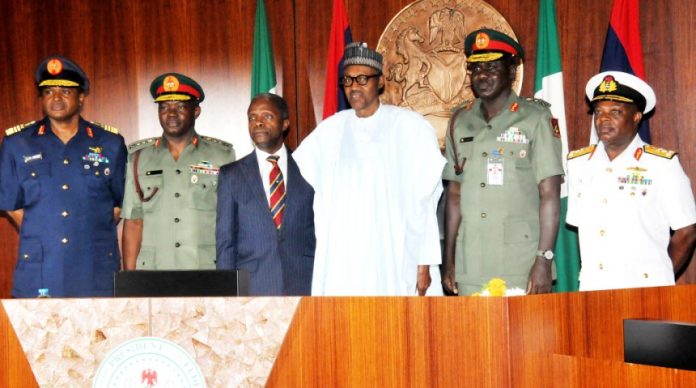 Less than 24 hours after the apex Islamic group, the Nigerian Supreme Council for Islamic Affairs, asked President Muhammadu Buhari to declare a state of emergency on security, the President boasted of the successes recorded by his regime in the fight against insurgency.

Buhari also passed a vote of confidence in the Nigerian Air Force amid calls for the sacking of the service chiefs.

Expressing his view at the inauguration of three helicopters in Abuja on Thursday, the President said, “I promised to put an end to Boko Haram insurgency, kidnapping and other forms of criminalities that have bedeviled our country during my inaugural speech as President.

“You will all agree with me that the successes we have achieved so far have restored our pride and honour the world over.”

The President thanked Nigerians for believing in his government in spite of occasional outrages, coming together as a nation, irrespective of political, religious and ethnic affiliations.

Buhari appreciated Nigerians for their support of the military and other security agencies against terrorism, banditry, and kidnapping, adding that the security challenges would be collectively won.

He said the newly acquired helicopters would help in boosting the fight against insurgency.

Recall that the leadership of the Christian Association of Nigeria as well as the General Overseer of the Redeemed Christian Church of God, Pastor Enoch Adeboye, had on Sunday held nationwide rallies in protest of the recent spike in insurgency.

The House of Representatives had last week passed a resolution seeking the sacking of the service chiefs who have all spent more than four years in office.