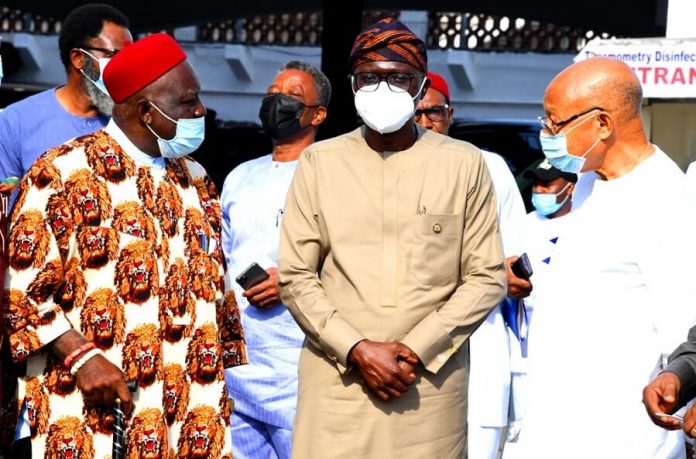 Ohanaeze Ndigbo has urged Governor Babajide Sanwo-Olu to disregard allegations of planned attacks on Lagos State by the Indigenous People of Biafra (IPOB).

It said Ndigbo will not engage in activities capable of disrupting the peace and cordial relationship between Igbo and Yoruba, especially in Lagos, which is the “second home of several Ndigbo”.

President-General of Ohanaeze Ndigbo Worldwide Prof. George Obiozor described the rumour as a ploy to pit Ndigbo against the Yoruba

“The dangerous rumour is aimed at causing division, crisis and conflict among us,” he said.

A statement yesterday by Sanwo-Olu’s Chief Press Secretary, Gboyega Akosile, said Obiozor led members of the association to visit Sanwo-Olu at the Lagos House in Marina.

He said: “The leadership of Ohanaeze Ndigbo Worldwide, in the company of Igbo Elders and Leaders in Lagos, are here to reassure you that Ndigbo are not violent, neither are we known for acts of violence anywhere we live.

“We state clearly that anywhere this dangerous rumour or statement is emanating from is aimed to cause division, crises and conflict among us.”

In response, Sanwo-Olu assured the Ohanaeze leadership of continued good governance, security of lives and properties of all residents in Lagos.