Edo State government is all set to pull down T. Latifa Hotel owned by Tony Adun, a chieftain of the APC in Edo popularly known as Kabaka, after state governor, Mr. Godwin Obaseki pledged to do so.

Speaking on his decision at the Annual General Meeting of the Edo/Delta branch of Manufacturing Association of Nigeria, said there was no political undertone in the decision since he had warned in the past that his administration would not tolerate lawlessness.

He stated his administration is not afraid of anybody and would not succumb to blackmail.

His words, “Businesses cannot thrive when there is anarchy and complete disrespect for the law. For us as a government, whatever we need to do to ensure that there is law and order will be done.

“If any law has been breached in Edo State, I have sworn to the constitution to preserve order. This is a government that is not afraid of anybody and will not be subjected to blackmail. Anybody who contravenes the law, no matter how highly placed you are in Edo State, you will be dealt with.

“It has no political undertone. If you go to Etete now, I am doing the same thing. I am fencing the sports centre. I have warned in the past that anybody who encroaches on government land or school properties will be dealt with. Go to Benin Technical College, that is evidence. As long as they continue to behave lawless, we will enforce the law”, the governor stressed. 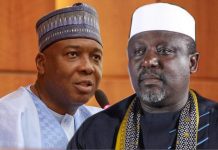