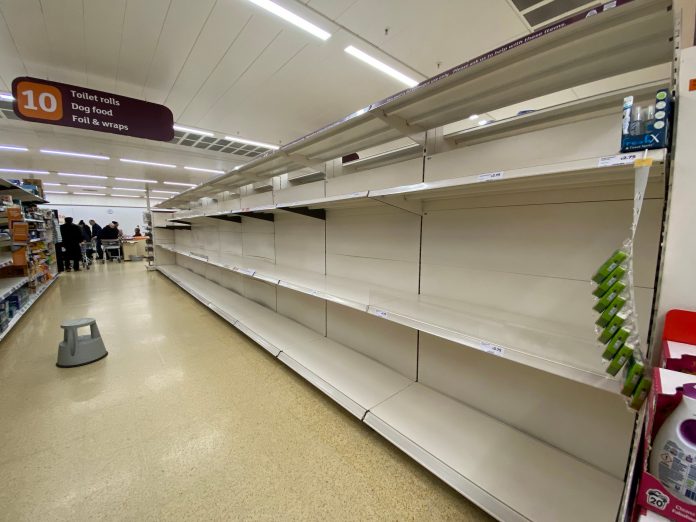 Londoners continue to panic buy amid the UK coronavirus outbreak despite reassurance from Government that food and essential items will not run out.

Packed shops and empty shelves have become a common sight in the capital as members of the public venture out to pile up on goods.

The mass stockpiling has forced supermarkets to take drastic action to cut opening hours and ration products – such as toilet paper and milk – to between two and four items per person.

Some people have also been ignoring pleas from stores to allow senior citizens to shop in the first hour of opening. Long queues have been seen at London supermarkets this week.

A video that emerged of Tesco in New Malden showed a line of shoppers with packed trolleys snaking through the supermarket.

Meanwhile, Government officials have insisted there will be no shortage of food and supplies with Environment Secretary George Eustace telling the Commons there is “significant resilience in our food supply chain”.

“There isn’t a shortage of food, the challenge that we’ve had is getting food to shelves in time when people have been purchasing more.”
Panicked shoppers spent an extra £57.3 million on “stockpiling” items including medicines, handwash and canned food in the first week of March compared to the previous week as pandemic panic set in, reported The Grocer citing data from Nielsen Scantrack.

People have been reporting their anger, frustration and sadness at the panic buying been seen across the nation which is hindering key workers and the elderly from being able to buy what they need.

Supermarkets have announced measures to restrict purchases and ensure the availability of goods for the elderly and vulnerable customers.