Israel on Thursday has said it will bar a planned visit by two US congresswomen who have supported a boycott of the country over its treatment of the Palestinians, a decision strongly encouraged by President Donald Trump.

Prime Minister Benjamin Netanyahu called the highly unusual move against Ilhan Omar and Rashida Tlaib necessary, charging that their “sole purpose is to harm Israel and increase incitement against it”.

US politicians called on Israel to reconsider, while senior Palestinian official Hanan Ashrawi labelled it “an outrageous act of hostility against the American people and their representatives”.

Omar described the decision as “chilling” and an “insult to democratic values.” Omar and Tlaib, who is of Palestinian origin, Minnesota and Michigan respectively were expected to arrive in Israel at the weekend for a visit that would have taken them to the Palestinian territories.

However, Israeli officials said they would consider a separate humanitarian request from Tlaib to visit her family, a trip for which she would have to pass through Israel.

Israel announced its decision shortly after Trump called on the country to bar the Democratic congresswomen.

“It would show great weakness if Israel allowed Rep. Omar and Rep. Tlaib to visit,” Trump wrote on Twitter.

He continued with typical bombast, “They hate Israel & all Jewish people, & there is nothing that can be said or done to change their minds. Minnesota and Michigan will have a hard time putting them back in office. They are a disgrace!” 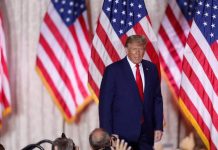