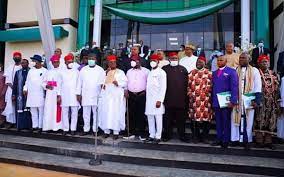 Governors of the 17 southern states are scheduled for a meeting in Asaba, Delta State capital for deliberations on finding long lasting solutions to address the growing insecurity in the region.

At the top of their agenda is the need to address the persistent attacks on police assets and killing of policemen in the Southeast and Southsouth.

No state in the two zones has been spared the gunmen attacks.

Southwest governors created Amotekun while their Southeast counterparts are in the process of setting up Ebube Agu – security outfits to assist the police which are overwhelmed by the situation.

Sixteen governors are expected at the meeting to be hosted by Delta State Governor Ifeanyi Okowa today in Asaba.

Osun State Governor Adegboyaga Oyetola is in Saudi Arabia for lesser Hajj. He will not be attending.

Delta State Information Commissioner Charles Aniagwu said: “By the Grace of God, 16 southern governors, including my boss Governor Okowa, will attend this one day meeting”.