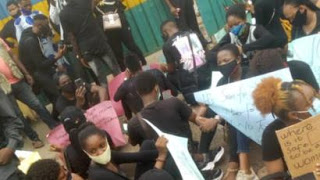 The Inspector-General of Police, Mohammed Adamu, has deployed investigation aid and forensic support to the Edo State Police Command to complement the ongoing probe of the death of a 100-level student of the University of Benin, Uwaila Omosuwa.

It had earlier been reported that Uwaila had gone to study in the Redeemed Christian Church of God, Miracle Sanctuary Mega Parish, Edo Province 10, Ikpoba Hill area of Benin City on May 27, 2020, when she was raped and brutalised by her assailants.

The men had reportedly forced their way into the church, raped and smashed Uwaila’s head with a fire extinguisher. It was gathered that the church security guard, who just resumed duty, found Uwaila in a pool of her own blood and called for help, while the victim was rushed to the University of Benin Teaching Hospital.

Uwaila did not recover from her state of unconsciousness until she died on Saturday.

The Deputy Commissioner of Police, Operations, Ayoola Ajala, who received the protesters, assured them that investigation had commenced and arrests had been made in connection with the murder.

The IG also in a statement by the Force Public Relations Officer, Frank Mba, said the killers of Uwaila would be brought to justice.
The statement read, “As part of deliberate and concerted efforts by the Nigeria Police High Command to unravel the circumstances surrounding the brutal attack and unfortunate death of Miss Vera Uwaila Omosuwa in Benin, Edo State, on May 28 and 30, 2020, respectively, the Inspector-General of Police has deployed additional investigation aids and forensic support in the Edo State Police Command to complement and expedite action on the ongoing investigation into the unfortunate incident.

“The IG, while condemning the attack, commiserates with the family, friends and colleagues of the deceased. He calls for calm and gives the assurance that the force will surely bring the perpetrators of the callous act to justice in the shortest possible time.”
Edo State Governor, Godwin Obaseki, described Uwaila’s rape and murder as the height of criminality.

Obaseki, who spoke on the killing during his visit to the State House in Abuja on Monday, described it as gruesome and sheer madness, adding that the killers must be tracked down.

He said, “Fortunately, my new commissioner of police resumed today (Monday). I’m going back to Benin and that will be the first assignment. We must track down the killers, because their action is gruesome. It’s sheer madness.

“Why would you go to a church and rape a young girl? It’s the height of criminality and this is one reason I have decided to contest (seek re-election) and ensure that we impose a state of order in Edo and get rid of criminal gangs, even if they are in our politics (political party).”