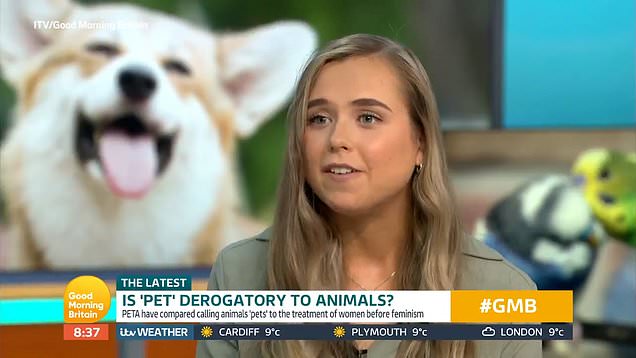 Morgan had way too much fun tearing into a guest on Good Morning Britain during a debate on whether we should stop calling pets, pets.

The ITV show facilitated a firey segment to discuss the controversial topic after animal rights group Peta argued that the term pet is derogatory and suggested we should start using words like ‘companion’ to describe our cats, dogs, guinea pigs, goldfish, etc.

Arguing Peta’s point, Jennifer White began, “A lot of people at home who have dogs and cats refer to them as pets and they refer to themselves as owners, and this implies that the animals are a possession.”

But before Jennifer could even finish her sentence, Piers interrupted, “Oh for God’s sake, you don’t even believe this guff.”

“When you refer to animals, not as the living beings that they are, but as an inanimate object, it can reflect our treatment on our animals,”she continued.

But that was just the beginning as Piers then took aim at the list of anti-animal phrases that Peta wants to ban.

And of course, the segment catapulted into chaos when Piers pointed out the word ‘pet’ finds itself in Peta’s acronym. “You want to ban the word pet but you want your organisation to carry on being called Peta? Do you see the problem? But pet is offensive. I’m offended by the use of the word pet,” he raged.

Good Morning Britain viewers branded the debate ‘ridiculous’, with one writing, “What next? Don’t call a dog a dog as it’ll start thinking it’s ugly?”

“For once, I actually agree with @piersmorgan. Not being allowed to call your pets a pet is absolutely ridiculous,”added another.

Why I named my grandson, Goodnews –Obesere